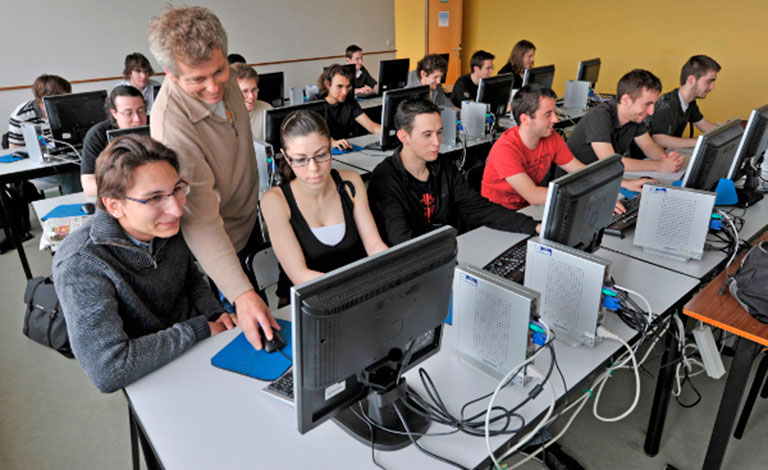 ISIMA strives to provide a complete overview of the techniques, notions and concepts used in the computing domain. This constantly changing domain is both a field in its own right and an interface for numerous applications. ISIMA must therefore broach the two aspects.

This notion, which the school strongly promotes, aims at developing communication between the developer and end-user, and allows the inclusion within a coordinated framework:

In practice, training is spread over three years.  The first year contains a common core curriculum. During the two following years the students have the chance to specialize by taking one of the 5 options:

An internship of 4 to 5 months within the industry (in France or abroad) separates the second and third year. Another internship of 5 to 6 months brings the tuition to an end. Professional training contracts are also possible in the third year.

Students can also elect to undertake during their third year one of the following courses:

Students taking one of these options benefit from a specially tailored timetable.

This can be summarized in the following diagram: 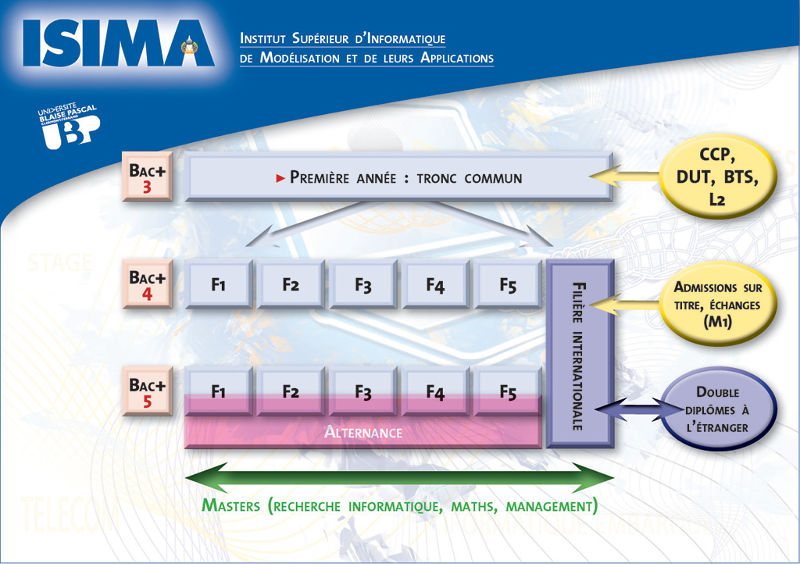 Assessment is carried out each year by a regular session of in-class tests and exams followed by a second session in September. The student passes the year if they have achieved, by the end , an average grade of 10 or higher in the theory exams and successfully completed their internship (in the second and third years) following a viva voce. If the student has not met the requirements, they may be allowed to re-sit the year.

Two languages are compulsory at ISIMA: English as LV1 and German, Spanish, Mandarin or Japanese as LV2.
LV1 and LV2 are studied in parallel over the three years in equal measure.  Students sit a language test for LV1 and LV2 (German or Spanish) during the first week of the academic year to stream the language groups. Students can also opt to study an LV3. To validate their ISIMA degree, a student must obtain a score of 800 or more in the TOEIC English test.